Who said it was plain?

Vanilla. Who said it was plain?? A lot of people I think! When people use Vanilla in the non food context, they usually refer to something that's plain, ordinary or dull. Someone needs to explain this to me. I on the other hand will tell you why Vanilla is anything but plain.

I had been looking for inspiration. For everything. What to cook, what to write, where to travel, and  well, almost everything. I was looking in the wrong places. Inspiration is everywhere, even inside my own refrigerator! (Which literally is the place I found inspiration to write this). Why is it that people go to extraordinary lengths to find the most unique cuisines, to blend them into their own and come with something even more exceptional. Each and every cuisine represents a culture and each and every recipe has a fascinating history.

Which made me think, as fascinating are the histories behind everything we eat, there are equally astonishing stories behind the raw material that goes into it. I'll start with something that has captured my imagination for a really long time - Vanilla.  This small (flavouring) ingredient for most desserts is misunderstood by a lot of people. Their extent of knowledge is the store bought synthetic vanilla essence that you put in cakes. I know that because I was right there until a few years back. But now I know better. I appreciate Vanilla and its subtle flavour (despite all the talk about synthetic Vanilla, personally I don't think it leaves an aftertaste). In 1969, Rosengarten  described the Vanilla flavour as "pure, spicy, delicate flavor and peculiar bouquet". I would say it is "foresty and sweet".

In India, Vanilla is not easily availaible (yet...some entrepreneurs are listening!) But thank globalization, world travel, disposable income or television, when we see Vanilla being used in desserts we want to use it too! So although not widely available you do get Vanilla in high end supermarkets or organic stores (warning - Vanilla is expensive - Rs 65 onwards for 2 beans, organic or otherwise). For all those in India, Fabindia does occasionally store Vanilla Beans. I am yet to come across pure Vanilla extract.

The origin of Vanilla itself is exotic. It is the fruit of an orchid (Vanilla planifolia or also called the Tahitian Vanilla)- the only orchid of about 20,000 varieties that produces an edible fruit.  It's not easy to grow commercially and is  native of Central America. The Vanilla flowers bloom for just a day, and must be pollinated manually or the fruit will not form. (Read this Wikipedia article to know more about Vanilla). When on the plants, the fruit is a long green coloured bean (see the picture below). After harvesting, the bean is fermented and sun dried and the process can take up to two years (and no wonder its expensive) !!! There are many types of Vanilla beans, depending on where they are grown. You have the Tahitian vanilla bean, the Mexican vanilla bean and the Madagascar-Bourbon vanilla bean. They say that the Mexican variety is the best. Pure Vanilla can be used in multiple forms - Extract, Powder or the Bean. Vanilla extract can be used in all of the homemade baked recipes.Vanilla bean need not necessarily be used in desserts. I found various main course recipes that used Vanilla - Pork fillet with vanilla-dipped potatoes, black pudding crumble and glazed pear, Poached sea trout with vanilla salad cream, heritage tomatoes and samphire, Pan-fried sea bass with fondant potato, parsnip cream, shallot purée and fennel vanilla sauce and more (courtesy BBC Food). A classic use for the vanilla bean is when making hot chocolate - where you put the whole pod into the boiling milk (yummy!!).

As usual, here's a picture of the Vanilla bean I got - Its been manufactured/marketed by "Orcid" (Sirsi, Karnataka). These are Cured Vanilla Beans - and they are organic. 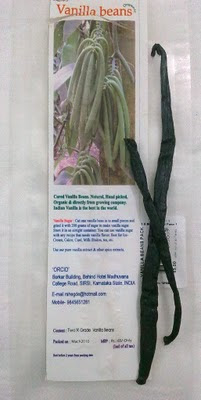 I would love to hear from you! If you have seen anything, eaten anything or been to anyplace mentioned here write in! If you want to share something interesting, go ahead! Want to make an obesrvation or want to give me your feedback, I am all ears. But derogatory, racist, rude or comments that are just plain mean, are not welcome around here. Comments are moderated for now; and any promotional campaigns will promptly filtered. 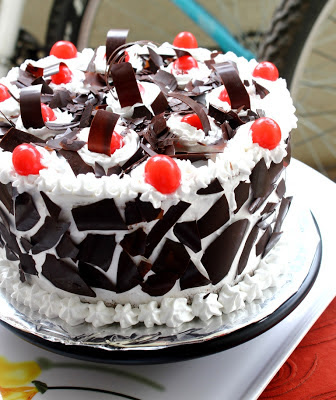 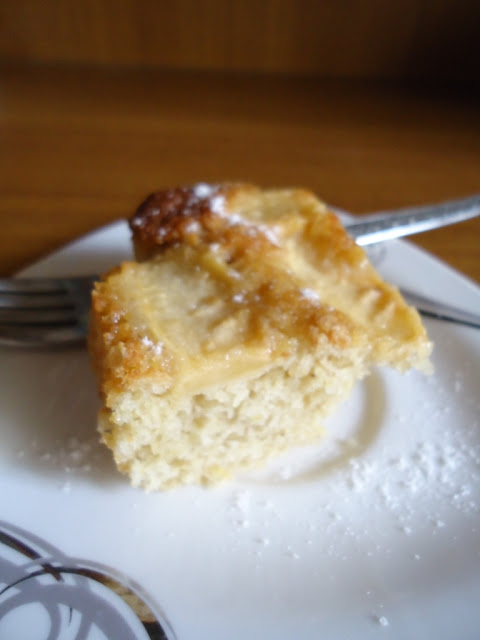